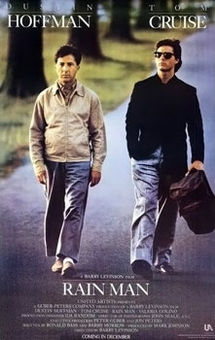 When he was younger, his brother couldn't pronounce Raymond, and called him Rain Man instead. Raymond's early life was tough as he was wrongly diagnosed with autism since the doctor was late for a golf game and hurried the diagnosis. He told Rain Man's father to put him in American Fork. An act Rain Man's father refused to do though this ordeal clearly affected Rain Man as he always goes "sorry you missed your golf game". Rain Man is an excellent driver and buys his boxer shorts at K-mart. He has the innate ability of accounting and memorization; as he remembers every detail he has ever seen, and he can predict statistics. But he has no clue when it comes to the worth of money. His pet peeves include pancakes being placed on the table before the maple syrup, dinner later than 4:00 and not having his tablets (he definitley needs his tablets). His bedtime is at 11 PM sharp and he MUST have his bed by the window.

Important details about the characterEdit

His character at the startEdit

His character at the endEdit

Retrieved from "https://10eg.fandom.com/wiki/Raymond_Babbitt?oldid=4084"
Community content is available under CC-BY-SA unless otherwise noted.